Sat at the Association of National Teaching Fellows one-day event in sunny Birmingham, I found myself engaging in passive-aggressive tweeting about bloody

‘resilience’. On my return, I complained about my disquiet with the way the term, and what it has come to stand for, have become pervasive in some parts of education. With great relief, I discovered that my office-mate Dr Nicola Rivers, shares some of my views. Out of our conversation, we have tried to capture the core of what, in a Higher Education context, is so problematic about the narratives on resilience, grit, Millennials, ‘snowflakes’ and ‘academic buoyancy‘ that seem so omnipresent.

There are things we leave out, such as the place of Mindfulness practice, discussions around ‘trigger warnings’, and free-speech on campus; and we hope to write a fuller version of this post, which includes them, possibly for publication elsewhere, but this is an initial ‘take’ on what happens to a concept when everyone thinks it’s a good idea…

Resisting Resilience, and other unpopular opinions

Everywhere you look in Higher Education, we are told that an attribute we ought to cultivate in our students (or act so as to encourage the cultivation of), is that of resilience. You can find toolkits for it, and articles asserting its decline. In the latter we encounter the claim that: “students’ emotional fragility has become a serious problem” (Psychology Today, Sept 2015), but no data, only anecdotes about students who can’t cope with criticism, or mice, or life in general. Some are more engaged with the complexity of student mental health, and the cultural setting such as the project: Stanford, I Screwed Up! A Celebration of Failure and Resilience, but the general cultural drift they represent makes us uncomfortable, and we hope to show why it should make you uncomfortable too.

But surely we are wrong? There is no question that students now are facing substantial 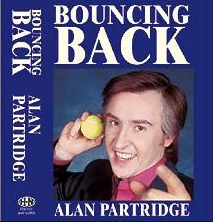 challenges, related to precarious employment contacts, housing and career prospects. There are many claiming, that we are facing a global mental-health epidemic (notable in relation to anxiety disorders)in young people. We have, you’d think, a moral duty to equip students with the best resources to deal with the harsh challenges of the real world. To a degree, that is persuasive, and I think all of us working in the University sector want to help our students cope, thrive and attain once they leave us. Of course. We are not monsters. But borne out of a concern for the welfare of students, having seen cohort after cohort of bright, amazing, interesting and intelligent young people pass from our tutelage into the world beyond, is the very worry that an overly crass, ubiquitous and uncritical narrative of ‘they need to be more resilient/tougher/less soft’ does them no favours, and at worst can feed into a more toxic cultural discourse that regards our current generation/s of young people as ‘snowflakes’, who are easily ‘triggered’, thereby slipping into the discourse of a cultural right-wing that many educators might rather steer clear of.

So, while seeing that in the case of individual students, resilience may be something that helps them, what do we mean by our broader concerns about its impact? What do we have in mind? We could well describe the ‘resilience response’ to substantive socio-economic instability as deeply neoliberal. We are aware that ‘neoliberal‘ is often considered empty and overused, so let us be clear here. In this context, we are interested in the wider cultural frame whereby the solution to problems, seen via primarily viewing persons as consumers, is presented through the case of individuals. Although seemingly benign then, the idea of instilling resilience in our students works to reinforce the facade of a meritocracy, suggesting the ‘best’ or most ‘resilient’ will succeed, while those who lack resilience will fail. Not only is this totally disingenuous – particularly for those of us working in the Humanities and Social Sciences whose own research frequently seeks to disrupt such basic neoliberal narratives – it also works to shift the focus from challenging the multiple social and structural barriers students may face, to instead suggesting the only barrier to success is the students themselves. What is then presented as an unequivocally good thing – to be resilient – is actually offering another way to fail, another way to be blamed. The relentless turn to individualism, and thinking individuals can solve their problems if only they’d do X (with one quick trick, as the click-bait article says), blinds us to ways of thinking about, or example, anxiety in ways that might have more efficacy in our communal response.

The language of ‘resilience,’ ‘grit’ and the insidious ‘Growth Mindset’ flatten out the 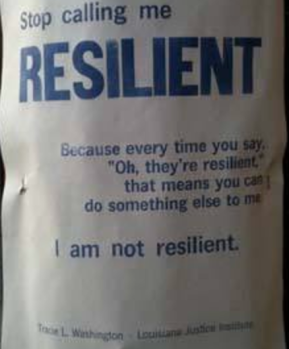 complexities of success or failure as well as the apparently personal attributes that influence either outcome. As Alfie Kohn argues addressing the possible pitfalls of the unquestioning promotion of the ‘growth mindset’ sweeping across classrooms, when talking about how ‘well’ students do, we need to ask, how well at what?  When we work to promote persistence, grit and resilience we assume that the worse thing in the world is to quit, but why? What about when quitting is the only reasonable course of action; and isn’t there a subtle but important difference between quitting and giving up that the language of grit and resilience rides roughshod over? In fact, it can take grit to know when to say no, enough is enough.

Students face huge debt and there are too few graduate jobs, yet when you discuss the issue of ‘employability’* – as academics are now (robustly) encouraged to do – frequently there is a citing of the importance of resilience and a ‘can do’ attitude, rather than say, a buoyant economy, or the availability of jobs for them to even apply to. The focus of employability then becomes ‘Let us make our students the ones who will defeat their students, by stacking them full of the attributes of the few winners.’ We are equipping them to compete for unpaid internships that profit from their precariousness and participate in the unequal ‘gig economy’ rather than critique it. Systemic conversations about communal problems are eclipsed by the need to intervene individually. The message is “fix yourself and the wider social issues will somehow take care of themselves.”

We are not alone** in some of these concerns, in a piece by Gabbi Binnie, entitled Struggling students are not ‘lacking resilience’ – they need more support, the author writes:

I have been working as a welfare officer for the past year, and I have rarely seen the term used to encourage self-improvement in an effective way. I have seen students told by their tutors, counsellors and other support staff that they just need to become more resilient. Yet there is little advice on how to do this, or why it will help.Students often see the word as a synonym for strength, and therefore feel that lacking resilience is a sign of weakness. A professor could be saying “be more resilient” and mean that a student shouldn’t take critical comments on their work personally. But what a student hears is something like, you aren’t strong enough, or you need to man-up, or you lack backbone.

This is interesting, and seems to concur with the popular register of the term. There is a more nuanced account in much literature, but when students hear it – they hear it in a context. A context where they are derided as somehow lacking in relation to previous generations – and one aspect of this lack is in ‘toughness’.

Our wider culture bombards us, and our students, with this view that they are ‘soft’, lack ‘grit’ and have somehow ‘let us all down’ (how often have you heard a comfortable, middle-aged, employed graduate complain that students are apathetic?). Not convinced? If we turn to writer, and twitter-user Luke Savage, he gathered a list of the things that articles assert Millennials have ruined. These include sex, groceries, soap, literature, breakfast cereal, diamonds, names, workplaces, privacy, lunch, and more..

But more seriously, rather than support students to challenge this view of them as ‘soft’ and oversensitive, the focus on resilience perpetuates this stereotype. While so-called ‘millennials’ are frequently derided for being self-obsessed – evident through their apparently narcissistic use of social media and embrace of the ‘selfie’ – those of us in a position to encourage students to look beyond themselves are covertly reinstating the overarching importance of the individual. Worst still, it is when students do actively engage in broader socio-political activism, abandoning the apparent ‘navel gazing’ they are so derided for, that they are most frequently positioned as oversensitive  ‘snowflakes’ seeking offence when there is none. We are

not alone in noticing this, but it remains as pervasive as it is problematic.  In our ‘post-race’ and ‘post-feminist’ society, the issues they raise are assumed as having been dealt with by previous generations. To paraphrase Sara Ahmed, students aren’t drawing attention to problems, they are the problem.

In short they are lacking ‘resilience.’  Resilience then plays into a wider and well-established framework, pitting generations against each other, with ‘generation rent’ apparently looking up enviously at the home owning so-called ‘baby boomers,’ who in turn sneer at the self-obsessed ‘snowflakes’ for failing to possess the resilience or grit of previous generations.

As we put these thoughts together, we also spotted a bunch of dangerous extreme radical thinkers also taking a sceptical stance towards ‘resilience’, on the hashtag #resistingresilience on twitter. That is, librarians. At the ACRL17 event, Angela Galvan, Jacob Berg, and Eamon Tewell presented a paper on Resilience, Grit and Other Lies. Some of the slides are below, but their concerns seem to echo our worries.

We are not calling for a moratorium on all uses of resilience, in all contexts. We are not complete idiots. We want our students to develop the attributes that make them employable, successful and happy; but is this narrative of resilience really going to make a contribution here? In a recent conversation one of us had with linguist, Tony Thorne, he remarked “Where is the proof that Generations Y/Z are really less resilient? They are subject to much more insidious and pervasive pressure (trolling, shaming, peer-pressure, manipulation by commerce, etc.) because of the digital environment they inhabit.”

What we want and need are better ways of thinking about our students, not so mired in such individualist tropes. Some University teaching has moved on to a more collaborative model (obviously not all,) so surely our broader student development model needs to keep pace. The resilience model of students sees them in perpetual lack: at fault. This is neither healthy nor accurate. Instead, we need to be open to broader ways of engaging students, of thinking about their lives, what levers they really have to effect change, and where we, the rest of us, might have some responsibility in having fashioned the world (and its occupants) which has come to pass.

*The authors are not against employability. Both having had experience of unemployment, and are acutely aware that students will be facing realities where they need to demonstrate their employability. Our reluctance to be gung-ho advocates of resilience is also drawn from a need to be open about the current economic environment and the opportunities available. Even if a student has the right attitude, mindset and toughness, this is no guarantee of success. Further, having “the right attitude, mindset and toughness” is not an authentic set of tangible outcomes to demonstrate to an employer. They are not like, say, actual skills.

21 thoughts on “Critiquing Discourses of Resilience in Education”