[Note: conference bingo image is not mine- but not sure where online I originally found it]

September is, for many academics, the conference season, but they occur all year, and this post is borne from decades of bad coffee, overstuffed powerpoint slides,  humble-brag introductions, and unspeakable ‘social event’ experiences.

Much of the behaviour I discuss here can be found in more general academic contexts, but there are two reasons for focussing on conferences. Firstly, they seem to invoke particularly concentrated cases of the behaviours I am discussing, and I might speculate that the platform they give, and the extended, and often new, audiences are factors in this concentration. Secondly, they often represent a specific nexus of anxiety, and point of transitional discomfort, for postgraduates, moving from a ‘student’ mind-set, towards being academics, with something of their own to contribute.

What this post is for, is to call time on some, what I see as pretty unacceptable, practices – and to have this dovetail with the work on resilience and on vulnerability, that I have been doing with colleagues.

This is largely in the sense of stripping out excessive ‘trial by fire’ mentality, and the idea of a macho, toughness, and replacing it with the sense that we are engaged, at conferences as we are more widely in the academy, with a collective enterprise: that of learning about the world, and communicating this.

So, what do I specifically have in mind?

Other Non-Questions that are perhaps less problematic, but still represent vainglorious interjections:

If you were hoping for some Carly Simon here – don’t be disappointed – here you go: http://www.youtube.com/watch?v=b6UAYGxiRwU 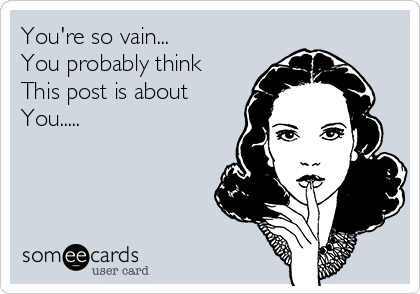 7 thoughts on “You’re So Vain, You Probably Think This Blog is About You: Academic Conference Misbehaviour”